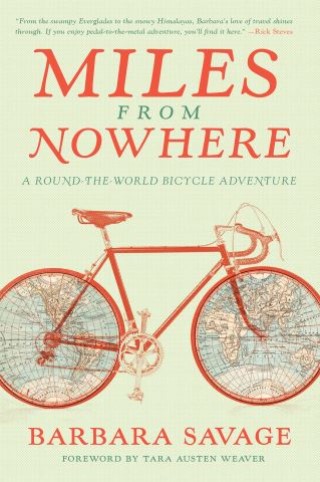 Miles from Nowhere is the story of Barbara and Larry Savage’s sometimes dangerous, often zany, but ultimately rewarding 23,000-mile bicycle odyssey, which took them through 25 countries in two years. Along the way, these near-neophyte cyclists on their ten-speeds encountered warm-hearted strangers eager to share food and shelter, bicycle-hating drivers who ran them off the road, various wild animals (including an attack camel), rock-throwing Egyptians, overprotective Thai policeman, motherly New Zealanders, meteorological disasters, bodily indignities, and great personal joys. The stress of traveling together constantly tested yet strengthened the young couple's relationship and as their trip ends, you'll find yourself yearning for Barbara and Larry to jump back on their bikes and keep pedaling.

Originally published in 1983, Miles from Nowhere has provided inspiration for legions of modern travel-adventurers and writers.

Tara Austen Weaver: Tara Austen Weaver writes about food, travel, culture, the environment, art, and adventure in its many guises. She is the author of three books, including The Butcher and the Vegetarian (Rodale, 2010) and Orchard House (Ballantine, 2015). She is also the author of the multiple award-winning blog Tea & Cookies. Weaver lives in Seattle.