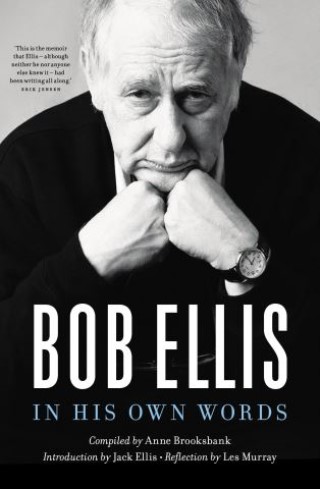 In His Own Words

Bob Ellis: In His Own Words showcases the best of Ellis’s celebrated and much-loved essays, speeches, diaries and scripts, in addition to previously unpublished work, archival photos, and reflections from close friends and family. Compiled by Anne Brooksbank, this collection contains all the wit, acuity and forthrightness that we have come to expect from this inimitable wordsmith.

This book honours Ellis’s illustrious and prodigious writing legacy: it’s a keepsake for longtime Ellis fans that will also win him many new admirers.

‘The belief in a grand narrative, buttressed by the old-fashioned virtues of social democracy, clothed in a prose an angel would envy, characterised the life, art and politics of Robert James ‘Bob’ Ellis. His imprint on our film culture, theatre and in political commentary was huge and his passing has created an absence that will be hard to fill.’ —Michael Cooke

‘This is the memoir that Ellis – although neither he nor anyone else knew it – had been writing all along.’ —Erik Jensen

‘Bob Ellis is not merely the finest prose writer Australia has produced, he is probably the finest three or four of them.’ —Guy Rundle

‘The inestimable Ellis teaches us that no one should ever be ashamed of their bleeding heart.’ —Marieke Hardy

Bob Ellis: Bob Ellis is the author of over twenty books, fifty-five screenplays, two hundred poems, five hundred political speeches, a hundred songs and two thousand film reviews. He had a long and close involvement with politics, covering as a journalist twenty-five campaigns in Australia, the UK, and the US, and writing speeches for Kim Beazley, Bob Carr among others. Bob Ellis died in April 2016.