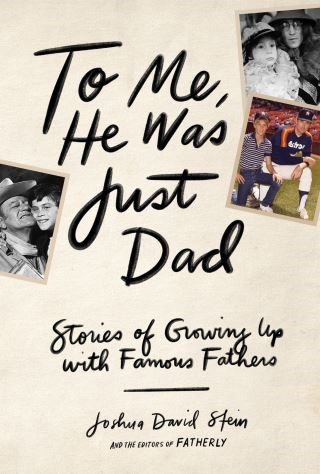 To Me, He Was Just Dad

Stories of Growing Up with Famous Fathers

“The lowdown on what it’s like to be raised by a legend. Frequently funny and consistently intimate. . . . A great read.”
—BookPage

Men like John Wayne and John Lennon, Nolan Ryan and Bruce Lee, Cesar Chavez, Christopher Reeve, and Miles Davis have touched the lives of millions. But at home, to their children, they were not their public personas. They were Dad. Maybe Davis didn’t leave the office at five o’clock to come home and play catch with his son Erin, but the man we see through Erin’s eyes is so alive, so real, so not the “king of cool” (he taught his son to box, made a killer pot of chili, watched MTV alongside him) that it brings us to a whole new appreciation for the artist.

Each of these forty first-person narratives—intimate, heartfelt, unvarnished, surprising, and profoundly universal—shows us not only a very different view of a figure we thought we knew but also a wholly fresh and moving idea of what it means to be a father.

Joshua David Stein: Joshua David Stein is the editor at large at Fatherly, and the host of The Fatherly Podcast. He is also a coauthor of Notes from a Young Black Chef, Food & Beer, the upcoming Nom Wah cookbook, and the Il Buco cookbook and the author of the children’s books Can I Eat That?, What’s Cooking?, Brick: Who Found Herself in Architecture, Can You Eat?, and The Ball Book. The father of two sons, he lives in Brooklyn, New York.