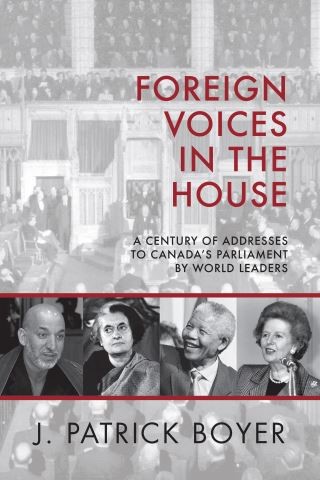 Foreign Voices in the House

A Century of Addresses to Canada's Parliament by World Leaders

Unique views from John F. Kennedy, Nelson Mandela, Indira Gandhi, and dozens of other world leaders reveal Canada and Canadians through their eyes.

During the First World War, foreign leaders began addressing Canadians in our House of Commons and, ever since, have continued influencing how we think about our role in global affairs. For a century now, this parade of world figures has brought urgent messages about Canada’s importance in world wars, the United Nations, Cold War security, decolonization and modernization, advancing human rights, environmental conservation, and combating terrorism.

All of the foreign leaders addressing Canada’s parliament sought to forge new partnerships between their own countries and ours in a rapidly evolving global context. Over the decades these speeches chart the stunning transformation of international affairs and Canada’s place in the world. No other source provides a complete record of this body of high-level oratory, gathered here for the first time in Foreign Voices in the House.

J. Patrick Boyer studied law at the International Court of Justice in The Netherlands, served as Canada’s Parliamentary Secretary for External Affairs, and works for democratic development overseas. The author of twenty-three books on Canadian history, law, politics, and governance, Patrick lives with wife, Elise, in Muskoka and Toronto.