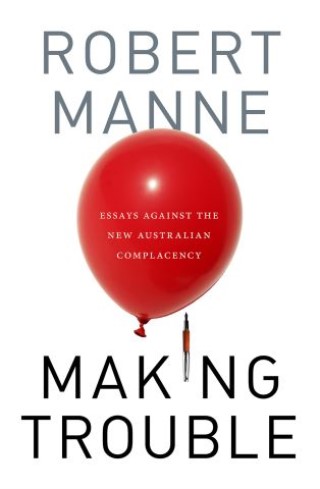 Essays Against the New Australian Complacency

Robert Manne has twice been voted Australia’s leading public intellectual. This book will show you why.

Making Trouble takes aim at the new Australian complacency. This is a book that will enlighten and challenge, as it traces the ideas and events that have recently changed the nation. It covers much ground – from Howard to Gillard by way of Rudd, from Victoria’s bushfires to the Apology, from Wilfred Burchett to Julian Assange.

Making Trouble also includes an exchange of letters with Tony Abbott, critical appraisals of the ‘insider’ Paul Kelly and the ‘outsider’ Mark Latham, an insightful discussion of the political and moral issues surrounding climate change, appreciations of W.E.H. Stanner and Primo Levi, a reflection on ways of remembering the Holocaust, and incisive and original essays about the question of reconciliation and the treatment of asylum seekers.

As this eloquent and important book shows, no one in Australia makes a better argument than Robert Manne.

‘This is a book for those who want to understand what it is to be an Australian public intellectual.’— Canberra Times

‘Compelling reading for anyone who wishes to understand how our political culture remains defined by Howard’s brand of conservatism.’— the Australian

Robert Manne’s many books include Making Trouble and The Words That Made Australia (as co-editor). He is the author of three Quarterly Essays, In Denial, Sending Them Home and Bad News.

Robert Manne: Robert Manne is professor of politics at La Trobe University and a regular commentator with the Age, the Sydney Morning Herald and ABC radio and television.