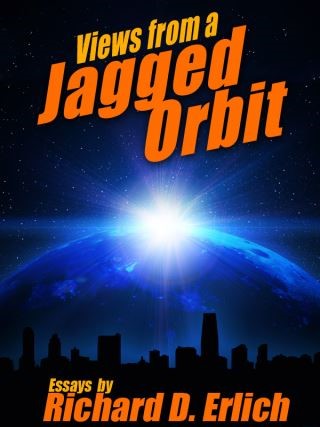 Views from a Jagged Orbit: Essays

These are essays, indeed, but generally not the sort taught in schools -- or that I taught for forty years: not in the elegant Intro/Thesis/Proof/Conclusion tradition but more in the older tradition of Michel de Montaigne and les essais, and of satire. That is, they are "attempts," explorations, and, well, also traps, where I wander around a bit in apparent innocence and then spring on readers a possibly outrageous idea, one they wouldn’t have considered for a moment if I hadn’t lulled them (you) into trusting me a bit. Some of the essays are also in the satiric tradition, where one tries for some startling combinations of learnéd language and vulgarity, short shocker sentences in the midst of some knotty convolutions.

Anyway, the essays usually do come to some fairly clear, fairly serious, non-random conclusion and Views can’t be entirely without form. So my initial editor and I have arranged them into categories. The over-arching, “meta” category for most is POLITICS or POLITICS AND CULTURE: I was brought up political in Chicago and have remained true to my breeding as a thoroughly political animal, and, of course, I am a student of, and participant in, at least a couple of cultures.