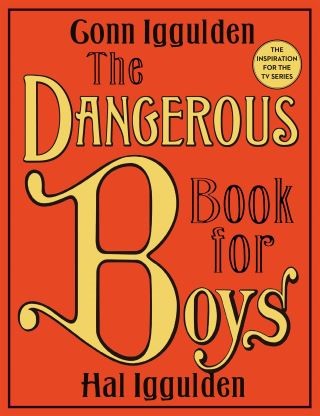 The Dangerous Book for Boys

The bestselling book—more than 1.5 million copies sold—for every boy from eight to eighty, covering essential boyhood skills such as building tree houses, learning how to fish, finding true north, and even answering the age old question of what the big deal with girls is—now a Prime Original Series created by Bryan Cranston (Breaking Bad) and Greg Mottola (Superbad).

In this digital age, there is still a place for knots, skimming stones and stories of incredible courage. This book recaptures Sunday afternoons, stimulates curiosity, and makes for great father-son activities. The brothers Conn and Hal have put together a wonderful collection of all things that make being young or young at heart fun—building go-carts and electromagnets, identifying insects and spiders, and flying the world's best paper airplanes.

Despite finding time to write historical novels and The Dangerous Book for Boys, Conn Iggulden is in some ways better known as a trainer of Tollins. His Tollin troupe, Small and Mighty, are famous in Tasmania, where they often play to packed houses. Tragically, he lost his two best-known performers earlier this year. "The thing about transporting Tollins in shoe boxes," he says, "the really important thing, is to remember to put the airholes in."

Lizzy Duncan, with her trademark blue glasses, was a founding member of the Tollins in Art program, where inner-city schoolchildren are taken to the countryside by bus and encouraged to paint and observe Tollins in their natural habitats. Tollins: Explosive Tales for Children was her first illustrated book.

Lizzy's abstract paintings of Tollins are much sought after whenever they appear at Sotheby's auction house, and she is very active in promoting Tollin rights and registering them as a protected wetland species—or as a dryland species, if the weather's been good.

Conn and Lizzy's first book together, Tollins: Explosive Tales for Children, was published in 2009 to great critical acclaim—and has ensured that no one will ever mistake a Tollin for a fairy again.

Hal Iggulden is the artistic director of the Holdfast Theatre Company in Leicester, England.