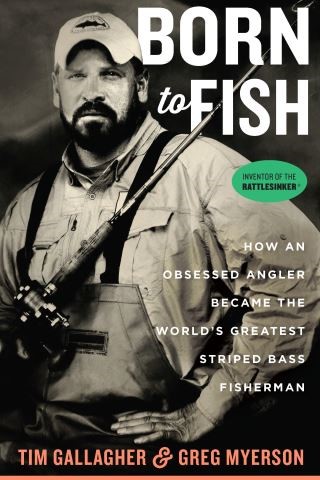 Striped bass world-record holder and inventor of the indisputably effective RattleSinker lure, Greg Myerson overcame a violent, difficult youth to triumph in the world of sportfishing

Tim Gallagher:
As TIM GALLAGHER was working on his book The Grail Bird, he was among the first to sight the long-thought-extinct ivory-billed woodpecker in Arkansas, which led to a multi-million-dollar effort to confirm the sighting and protect the bird's dwindling habitat. The sighting changed the direction of the book, for which Gallagher won the Outdoor Writers Association of America's Best Book award for 2005. Gallagher is editor-in-chief of Living Bird magazine and of the Journal of the North American Falconers' Association.
GREG MYERSON is a born fisherman who has spent the bulk of his life trying to figure out how to catch more and bigger fish. In 2011, he stunned the sportfishing world when he landed a nearly eighty-two-pound striped bass, demolishing a world record that had stood for twenty-nine years. He has won Angler of the Year three years in a row. More recently, he appeared on Shark Tank, where Mark Cuban enthusiastically financed his invention, an innovative lure for attracting striped bass.