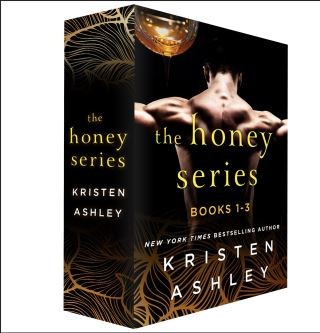 The Deep End, The Farthest Edge, and The Greatest Risk

THE DEEP END
Olivier isn’t sure what he’s gotten himself into when he joins the Honey Club, only that a dark part of him hungers for the lifestyle offered by this exclusive club. Here, no boundary will be left untested…and one's deepest fantasies will become an exquisite reality.

When Amélie invites Olivier to surrender, she gives the alpha submissive what he craves. Soon they both find themselves falling harder than they ever anticipated—but as their connection deepens, the truth about Olivier’s past could destroy everything…

THE FARTHEST EDGE
Branch doesn’t exist. Living off the grid, he’s looking for a way to forget his past and the guilt that plagues him. But no woman has ever been able to bring him to the edge he craves.

After a traumatic experience of her own, Evangeline stepped away from the decadent world of the Honey Club. But when she gets Branch’s offer—to play without boundaries or commitments—it’s too tempting for her to refuse.

As their passion ignites, Evangeline and Branch push each other to their farthest limit, fulfilling their darkest desires while falling harder and deeper than they ever imagined.

THE GREATEST RISK
A woman unable to connect, struggling to hide another part of her. A man burning to learn her truth, and make her whole. Through explosive passion and deep exploration, they are about to take the greatest risk of all. But will they be able to take that leap, and come out on the other side together?