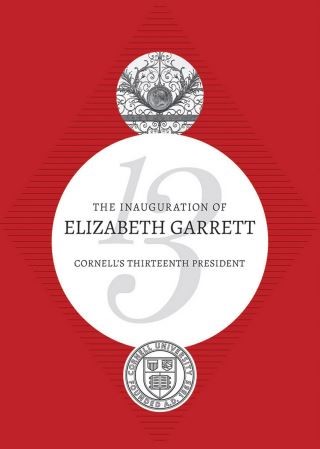 The Inauguration of Elizabeth Garrett

On the occasion of the inauguration of Cornell's thirteenth president, Elizabeth Garrett, Cornell University Press is pleased to publish the official commemorative edition of her inauguration speech. This handsome volume also includes several other sections of interest to Cornellians, including a foreword by President Emeritus Frank H. T. Rhodes, remarks from Board of Trustees Chair Robert S. Harrison, poetry by Alice Fulton, selected texts by Ezra Cornell and A. D. White, a feature on Cornell’s Sesquicentennial, brief biographies of past presidents of Cornell, and a historical account of women at Cornell by Gretchen Ritter, the Harold Tanner Dean of Arts and Sciences.

President Garrett’s speech will be remembered for years to come, and this book is a wonderful keepsake of a historic occasion.