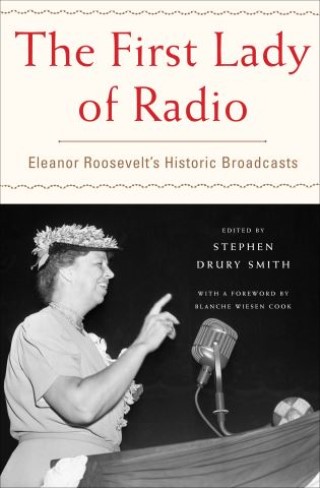 The First Lady of Radio

“This anthology of 38 addresses . . . offer[s] a means for visiting anew the lifework of an extraordinary American woman” (HistoryNet).

A tie-in to the American RadioWorks® documentary—with audio and video content.

Eleanor Roosevelt’s groundbreaking career as a professional radio broadcaster is almost entirely forgotten. As First Lady, she hosted a series of prime time programs that revolutionized how Americans related to their chief executive and his family. Now, The First Lady of Radio rescues these broadcasts from the archives, presenting a carefully curated sampling of transcripts of Roosevelt’s most famous and influential radio shows, including addresses on the bombing of Pearl Harbor, D-Day, V-E Day, and women’s issues of the times. Edited and set into context by award-winning author and radio producer Stephen Drury Smith—and with a foreword by Roosevelt’s famed biographer, historian Blanche Wiesen Cook—The First Lady of Radio is both a historical treasure and a fascinating window onto the power and the influence of a pioneering First Lady.

“An intriguing glimpse into the social and political changes of the period.” —Publishers Weekly

“[Eleanor Roosevelt] was terrified of speaking in public at first, and her high-pitched voice could sail off uncontrollably. Yet she became one of the most effective speakers of her time.” —David McCullough