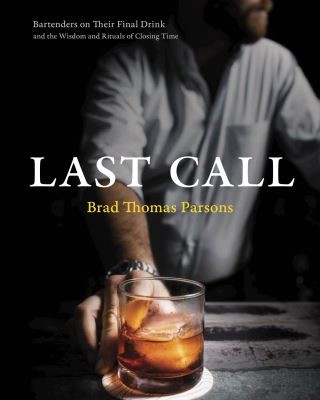 From the James Beard Award-winning author of Bitters and Amaro comes this poignant, funny, and often elegiac exploration of the question, What is the last thing you'd want to drink before you die?, with bartender profiles, portraits, and cocktail recipes.

Everyone knows the parlor game question asked of every chef and food personality in countless interviews: What is the last meal you'd want to eat before you die? But what does it look like when you pose the question to bartenders? In Last Call, James Beard Award-winning author Brad Thomas Parsons gathers the intriguing responses from a diverse range of bartenders around the country, including Guido Martelli at the Palizzi Social Club in Philadelphia (he chooses an extra-dry Martini), Joseph Stinchcomb at Saint Leo in Oxford, Mississippi (he picks the Last Word, a pre-Prohibition-era cocktail that's now a cult favorite), and Natasha David at Nitecap in New York City (she would be sipping an extra-salty Margarita). The resulting interviews and essays reveal a personal portrait of some of the country's top bartenders and their favorite drinks, while over 40 cocktail recipes and stunning photography make this a keepsake for barflies and cocktail enthusiasts of all stripes.

“[Parsons] captures the people and places through stunning photographs and prose. Like a perfectly balanced cocktail, it is equal parts cocktail recipes, travelogue and mixtape.”—The Atlanta Journal-Constitution

“Measure equal parts travelogue, tell-all, discography, and cocktail companion—in service of an obituary of all patrons—and you have Last Call; Brad Thomas Parsons’s best book yet.  Through soulful photos and gritty interviews, he and photographer Ed Anderson capture the rawness, vulnerability, and ecstasy of the metamorphosis between the end of a guest’s night and the beginning of a bartender’s.”—Jim Meehan, author of Meehan’s Bartender Manual and The PDT Cocktail Book

Brad Thomas Parsons: Brad Thomas Parsons is the author of Bitters (which was the winner of the James Beard and IACP Cookbook Awards, and a finalist for the Tales of the Cocktail Spirited Awards), Amaro, and Distillery Cats. He received an MFA in writing from Columbia University, and his work has appeared in Bon Appétit, Lucky Peach, Food & Wine, Travel + Leisure, PUNCH, and more. He lives in Brooklyn.