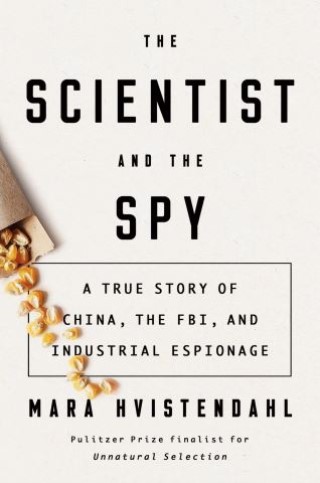 The Scientist and the Spy

A True Story of China, the FBI, and Industrial Espionage

A riveting true story of industrial espionage in which a Chinese-born scientist is pursued by the U.S. government for trying to steal trade secrets, by a finalist for the Pulitzer Prize in nonfiction.

In September 2011, sheriff’s deputies in Iowa encountered three ethnic Chinese men near a field where a farmer was growing corn seed under contract with Monsanto. What began as a simple trespassing inquiry mushroomed into a two-year FBI operation in which investigators bugged the men’s rental cars, used a warrant intended for foreign terrorists and spies, and flew surveillance planes over corn country—all in the name of protecting trade secrets of corporate giants Monsanto and DuPont Pioneer. In The Scientist and the Spy, Hvistendahl gives a gripping account of this unusually far-reaching investigation, which pitted a veteran FBI special agent against Florida resident Robert Mo, who after his academic career foundered took a questionable job with the Chinese agricultural company DBN—and became a pawn in a global rivalry.

Industrial espionage by Chinese companies lies beneath the United States’ recent trade war with China, and it is one of the top counterintelligence targets of the FBI. But a decade of efforts to stem the problem have been largely ineffective. Through previously unreleased FBI files and her reporting from across the United States and China, Hvistendahl describes a long history of shoddy counterintelligence on China, much of it tinged with racism, and questions the role that corporate influence plays in trade secrets theft cases brought by the U.S. government. The Scientist and the Spy is both an important exploration of the issues at stake and a compelling, involving read.

Mara Hvistendahl: Mara Hvistendahl covered China’s renaissance in science and technology as a correspondent in Shanghai for Science. She has also written for The Atlantic, Popular Science, WIRED, and other publications. She is the author of Unnatural Selection: Choosing Boys Over Girls, and the Consequences of a World Full of Men, which was a finalist for the Pulitzer Prize for Nonfiction and the Los Angeles Times Book Prize. A proficient Mandarin speaker and former National Fellow at New America, she lived in China for eight years and now resides in Minneapolis with her family.