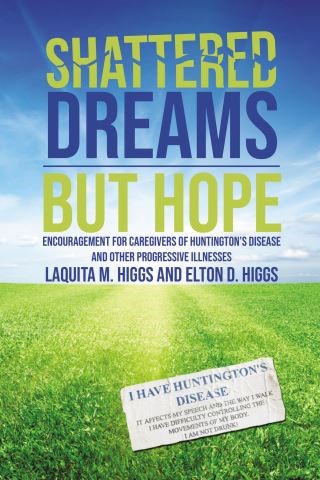 Encouragement for Caregivers of Huntington’s Disease and Other Progressive Illnesses

Shattered Dreams--But Hope by Drs. Laquita and Elton Higgs, is a book of both testimony and advice: testimony born out of the school of trial and suffering, and advice born out of practical experience in being long-term caregivers. Laquita and Elton have for the last 26 years been caregivers to two adopted daughters with early onset Huntington’s Disease (HD), which is hereditary, and they offer a gripping account of their extended experience in adjusting to the challenges of long-term caregiving, followed by sober practical counsel to others who are involved in similar caregiving experiences. A final chapter speaks specifically of the role of Christian faith in coping with the stresses of their long struggle. In the Appendices are a short talk given after Cynthia’s funeral by her older sister Liann and several poems by Elton on the emotional impact of his and Laquita’s relationship with their disabled daughters.

The complexity of the story told by the Higgses is heightened by the fact that their two youngest adopted daughters are mother (Cynthia) and biological daughter (Rachel). Elton and Laquita adopted Cynthia as a baby, knowing that she had HD in her background but hoping and praying that she would not develop the disease. Her childhood was normal, but when she became an adolescent, she began to manifest behavioral aberrations that her parents later recognized as being consistent with early onset HD. At age 25, Cynthia was diagnosed as having the disease, and soon afterward she became pregnant with Rachel. Since it was apparent that she could not function as a single mother, Laquita and Elton agreed to adopt Rachel at birth. This action ushered them into a complicated care-giving relationship that has lasted for more than 25 years.

Laquita and Elton emphasize the difficult but necessary development of trust in God’s goodness and a deep conviction that He is at work even when we can perceive no immediate evidence of it. Especially poignant is their very personal confession of their mistakes in caring for their HD-affected daughters and their struggles to understand that HD, not mere perversity, was the primary source of their daughters’ irrational and angry behavior. Thus, they had to accept that expecting their daughters to be normally responsible persons was both futile and unproductive. Instead, they had to learn simply to love them with God’s love and to pray constantly for God’s wisdom in carrying out their task. It is from this perspective of learning to survive through hardship that Laquita and Elton tell their story and offer both practical and spiritual counsel for caregivers everywhere.

Laquita and Elton Higgs grew up in Texas and moved to Michigan in 1965.  They both have Ph.D.s, Elton in English and Laquita in history. Elton taught at the University of Michigan-Dearborn for 36 years, and Laquita taught there part-time. They have three adopted children, the younger two of whom manifested Huntington’s Disease and are the subjects of this book.  Laquita and Elton are committed Christians and are active in their local church, as well as writing articles for Christian publications.