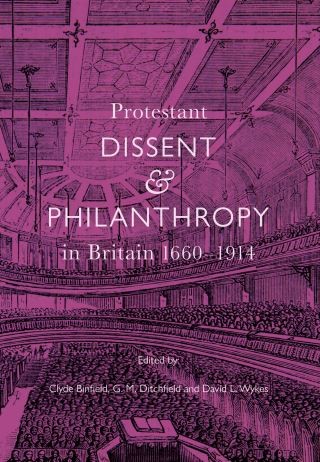 Protestant Dissent and Philanthropy in Britain, 1660-1914

This collection examines the contribution made by Dissenters from the Church of England to the history and development of charity and philanthropy in Britain from 1660 to the beginning of the twentieth century. It looks at the importance of charity and philanthropy in supporting Protestant Dissent and the causes with which it was associated; the part charity and philanthropy played in helping to fashion a self-identity for Dissent and for individual denominations; and the distinctive contributions made both by Dissenters generally and by particular denominations. Dissent and philanthropy intersect at many different points and levels: between the public and the private, the state and the individual, the voluntary and the organized. Philanthropy was an essential feature of the relationship between Dissent and the society from which it sometimes felt itself to be separate. Each chapter not only covers the contribution of a particular denomination but forms a case study of a wider aspect of charitable or philanthropic activity within Dissent as a whole. This volume is the first study which examines the contribution of Dissenters to charity and philanthropy, one of the most important developments in British society between the Restoration of Charles II and the outbreak of the First World War. CLYDE BINFIELD is Emeritus Professor of History at the University of Sheffield. His publications have concentrated on nonconformist history, in particular its social, cultural, and political contexts, from the late eighteenth century to the mid twentieth century. G. M. DITCHFIELD is Emeritus Professor of History at the University of Kent. His publications include The Evangelical Revival, George III. An Essay in Monarchy, and The Letters of Theophilus Lindsey (1723-1808). DAVID L. WYKES is Director of Dr Williams's Trust and Library. He edited Parliament and Dissent with Stephen Taylor and, with Isabel Rivers, Joseph Priestley, Scientist, Philosopher, and Theologian and Dissenting Praise. CONTRIBUTORS: Clyde Binfield, John Briggs, Hugh Cunningham, G. M. Ditchfield, Jennifer Farooq, Mark Freeman, Elizabeth Gow, David Jeremy, Stephen Orchard, Alan Ruston, David L. Wykes