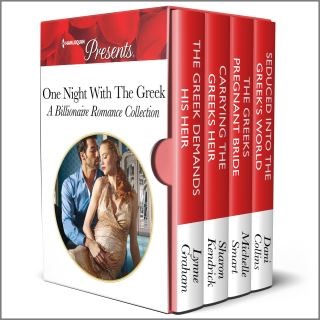 One Night With The Greek: A Billionaire Romance Collection

Escape with these irresistible and passionate Greek romances! Featuring previously published titles The Greek Demands His Heir by Lynne Graham, Carrying the Greek’s Heir by Sharon Kendrick, The Greek’s Pregnant Bride by Michelle Smart and Seduced into the Greek’s World by Dani Collins. Originally published in 2015.

The Greek Demands His Heir

Leo Zikos should be celebrating securing a perfectly convenient fiancée, but it’s left him cold. Instead it’s stranger Grace Donovan’s impeccable beauty that fires his blood. So he decides to pursue one last night of freedom…

But that night and the two little blue lines on the pregnancy test that follow blow Leo’s plans apart. Now he must break with his fiancée and marry Grace. She might resist marrying a man she barely knows, but Leo will claim his legacy and has all the riches and influence he needs to ensure his demands are met!

Pregnant with the billionaire’s baby!

From the moment hardworking Ellie Brooks met mogul Alek Sarantos her life has gone off the rails. First she was fired. Now she’s pregnant with the ruthless Greek’s baby!

It was only supposed to be one wild, passionate night. Yet when Ellie shows up demanding Alek legitimize their unborn child, he shocks himself…and agrees to her outrageous request!

Catapulted into a world she wasn’t meant for, with a husband she shouldn’t desire, Ellie’s resolve wavers. Until a tiny kick from within reminds her why she made a deal with this handsome devil: her baby, his heir…

The Gorgeous Greek: Married for His Heir

Christian Markos swapped the streets of Athens for the world’s top boardrooms. Now, with enough riches to indulge his every whim, there’s only one luxury he can’t buy: stunning, sensual Alessandra Mondelli.

His best friend’s sister is strictly off-limits…until their forbidden attraction consumes them both, leaving Alessandra pregnant!

After a youthful mistake, Alessandra is no stranger to public scrutiny. Christian’s honorable proposal offers her and their baby protection, but she must push all thoughts of love aside. Except their dishonorable hunger for one another is threatening their convenient arrangement!

Seduced into the Greek’s World

“I want you, Natalie. Not after five o’clock. Now.”

Every woman has a fantasy she only dares dream about in the dead of night. But for single mom Natalie Adams, the reality of an affair in Paris with infamous billionaire Demitri Makricosta surpasses even her wildest dreams!

Demitri is astounded by fiery Natalie. One night isn’t enough, so to quench his lust he insists she become his mistress. The closer Natalie gets to emotions Demitri has kept locked away, the more he distracts her with dazzling gifts and luxury holidays to ensure that seduction remains the only thing between them…

Lynne Graham: Lynne Graham lives in Northern Ireland and has been a keen romance reader since her teens. Happily married, Lynne has five children. Her eldest is her only natural child. Her other children, who are every bit as dear to her heart, are adopted. The family has a variety of pets, and Lynne loves gardening, cooking, collecting allsorts and is crazy about every aspect of Christmas.Sharon Kendrick started story-telling at the age of eleven and has never stopped. She likes to write fast-paced, feel-good romances with heroes who are so sexy they’ll make your toes curl! She lives in the beautiful city of Winchester – where she can see the cathedral from her window (when standing on tip-toe!). She has two children, Celia and Patrick and her passions include music, books, cooking and eating – and drifting into daydreams while working out new plots.Michelle Smart is a Publishers Weekly bestselling author with a slight-to-severe coffee addiction. A book worm since birth, Michelle can usually be found hiding behind a paperback, or if it’s an author she really loves, a hardback.Michelle lives in rural Northamptonshire in England with her husband and two young Smarties. When not reading or pretending to do the housework she loves nothing more than creating worlds of her own. Preferably with lots of coffee on tap.www.michelle-smart.com.When Canadian Dani Collins found romance novels in high school she wondered how one trained for such an awesome job. She wrote for over two decades without publishing, but remained inspired by the romance message that if you hang in there you'll find a happy ending. In May of 2012, Harlequin Presents bought her manuscript in a two-book deal. She's since published more than thirty books with them and is definitely living happily ever after.