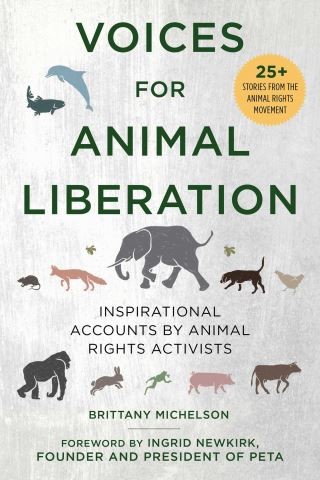 Immerse yourself in the world of animal rights protests, campaigns, demonstrations, outreach, rescue, and so much more.

In today’s world, voices of the marginalized are in the spotlight and people across the globe are recognizing animal rights as a social justice movement. During a time of historic actions and victorious campaigns, Voices for Animal Liberation depicts the full spectrum of animal rights activism that is currently at work to create change.

This book offers the words of both new and highly influential voices in the movement today, with the intention of inspiring and educating those who are sparked by the vision of a more ethical world. Including a foreword by Ingrid Newkirk, founder and president of PETA and arguably one of the most prolific figures in the animal rights movement, other contributors include:

Connect with activists from different backgrounds as they reveal their perspectives on animal rights, their experiences taking action for animals, the challenges they've faced, and the meaning of activism in their lives.