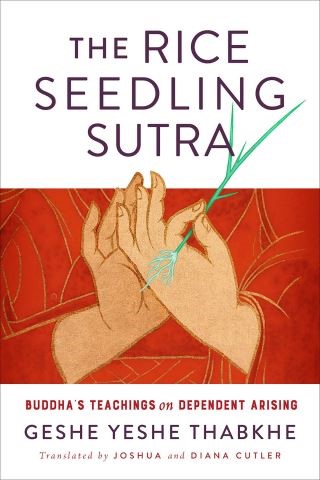 One of Tibet’s great scholars presents the Buddha’s profound teachings on the laws of karma and dependent arising.

In the Rice Seedling Sutra, the Buddha unpacks the law of cause and effect. He notes how in the natural world, a seed becomes a sprout, which produces a flower, which bears fruit. A seed has no intention to sprout; when the right conditions are assembled the fruit arises. Similarly, when our senses encounter an object, a sense consciousness arises naturally, without our intending it. This, says the Buddha, is also how karma works and how actions performed out of ignorance create suffering, whether we want it or not. And this same law of causality also governs enlightenment—when the right conditions are assembled, awakening is assured.

Geshe Yeshe Thabkhe was among the last generation of scholars to be trained in Tibet before the Chinese occupation. He has been teaching Westerners for decades, having worked with top scholars in the United States, and he is especially familiar with this sutra, having translated the commentary by Kamalasila into Hindi. Here his deep familiarity, combined with his extensive command of the Buddhist scriptures, allows him to present the Buddha’s words in a rich and authoritative context.

Yeshe Thabkhe: Professor Geshe Yeshe Thabkhe was born in 1930 in Lhokha, Central Tibet, and became a monk of Drepung Loseling Monastery at the age of thirteen. After completing his studies in 1969, Geshe Thabkhe was awarded the highest academic degree offered in the Geluk school of Tibetan Buddhism. Since 1972, he has served as professor of the Indian tradition of Buddhist philosophy at Central Institute of Higher Tibetan Studies, the only Tibetan university in India. He has also served as a lecturer at the School of Buddhist Philosophy, Leh, Ladakh, and at Sanskrit University in Sarnath. His works include Hindi translations of Tsongkhapa’s Essence of Good Explanation of the Definitive and Interpretable and Kamalasila’s commentary on the Rice Seedling Sutra. He was the primary traditional source for the English translation of Tsongkhapa’s Great Treatise on the Stages of the Path. He is a resident teacher at the Tibetan Buddhist Learning Center in New Jersey and has also taught at Drepung Loseling in Georgia, Jewel Heart in Michigan, and Sravasti Abbey in Washington State.