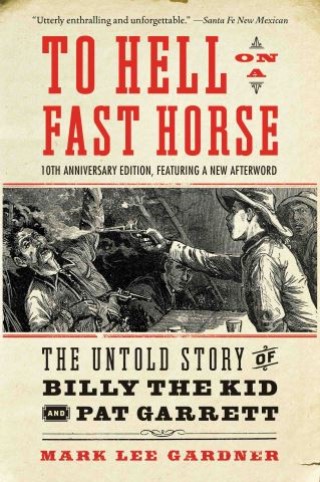 To Hell on a Fast Horse Updated Edition

The Untold Story of Billy the Kid and Pat

“So richly detailed, you can almost smell the gunsmoke and the sweat of the saddles.”—Hampton Sides, New York Times bestselling author

Billy the Kid—a.k.a. Henry McCarty, Henry Antrim, and William Bonney—was a horse thief, cattle rustler, charismatic rogue, and cold-blooded killer. A superb shot, the Kid gunned down four men single handedly and five others with the help of cronies. Two of his victims were Lincoln County, NM, deputies, killed during the Kid’s brazen daylight escape from the courthouse jail on April 28, 1881. After dspensing with his guards and filing through the chain securing his leg irons, The Kid danced a macabre jig on the jail’s porch before riding away on a stolen horse as terrified townspeople—and many sympathizers—watched. For new sheriff, Pat Garrett, the chase was on . . .

To Hell on a Fast Horse recreates the thrilling manhunt for the Wild West’s most iconic outlaw. It is also the first “dual biography” of the Kid and Garrett, two larger-than-life figures who would not have become the stuff of legend without the other. Drawing on voluminous primary sources and a wealth of published scholarship, Mark L. Gardner digs beneath the myth to take a fresh look at these two men, their relationship, and what they would come to mean to a public enamored of a violent national past.