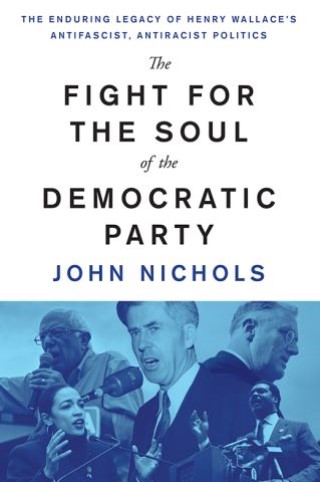 The Fight for the Soul of the Democratic Party

Seventy-five years ago, Henry Wallace, then the sitting Vice President of the United States, mounted a campaign to warn about the persisting "Danger of American Fascism." As fighting in the European and Japanese theaters drew to a close, Wallace warned that the country may win the war and lose the piece; that the fascist threat that the U.S. was battling abroad had a terrifying domestic variant, growing rapidly in power: wealthy corporatists and their allies in the media. Wallace warned that if the New Deal project was not renewed and expanded in the post-war era, American fascists would use fear mongering, xenophonbia, and racism to regain the economic and political power that they lost. He championed an alternative, progressive vision of a post-war world-an alternative to triumphalist "American Century" vision then rising--in which the United States rejected colonialism and imperialism.

Wallace's political vision - as well as his standing in the Democratic Party - were quickly sidelined. In the decades to come, other progressive forces would mount similar campaigns: George McGovern and Jesse Jackson more prominently. As John Nichols chronicles in this book, they ultimately failed - a warning to would-be reformers today - but their successive efforts provide us with insights into the nature of the Democratic Party, and a strategic script for the likes of Bernie Sanders and Alexandria Ocasio-Cortez.

John Nichols: John Nichols is the Washington correspondent for The Nation magazine, a contributing writer for the Progressive and In These Times, and the associate editor of Madison, Wisconsin's Capital Times. He's the author of several books, including The Death and Life of American Journalism, The Genius of Impeachment and The "S" Word.