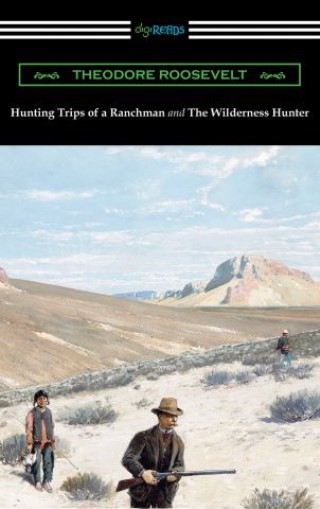 Hunting Trips of a Ranchman and The Wilderness Hunter

There may be no better example of American individualism and rugged outdoorsman than the 26th President of the United States, Theodore Roosevelt. In this volume we find two of Roosevelt’s works on hunting, “Hunting Trips of a Ranchman”, and “The Wilderness Hunter”, combined into one volume. Roosevelt, who as President would bring some 230 million acres of land under the protection of the National Parks and Forest Services, was an avid naturalist and his great devotion to the outdoors is evident in his depiction of his beloved Elkhorn Ranch in both of these books. Roosevelt devoted careful attention to both the details of the sport of hunting and the picturesque world around him as “Hunting Trips of a Ranchman” and “The Wilderness Hunter” function as nature travelogues and practical treatises on how to bag game. These works take place in one of Roosevelt’s favorites places, his Elkhorn ranch, which was located on the banks of the Little Missouri River in North Dakota. The location is now a part of the Theodore Roosevelt National Park. Roosevelt’s exciting and descriptive recollections of numerous hunts in these volumes will thrill and delight both the hunting and nature aficionado. This edition includes a biographical afterword.