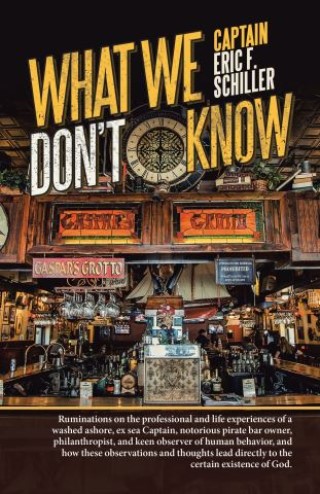 What We Don’t Know

Seagoing may be the world’s finest, most intensely rigorous education, however informal, unstructured, or lightly documented. Capt. Eric F. Schiller, a retired supertanker captain and now notorious pirate bar owner, sheds some light on an overlooked profession in these memoirs, highlighting working at sea often times will provide extraordinary and valuable life experiences. Beginning with his time as an officer in training aboard the SS American Liberty, his adventures start at a pier near downtown Hong Kong one sultry Southeast Asia summer morning in August 1973. In the summer of 1990, he sails from Honolulu, Hawaii, for Singapore’s Jurong Shipyard, Master of an old single-boiler steam tanker built in Newport News with lots of miles and lots of problems. Rumor had it that the steel plates the tanker was built from were recycled WWII tanks. The main condenser was leaking badly, and with saltwater entering the steam cycle, the ship and it’s crew made their way westward chasing rain clouds to collect water on deck to be used as boiler feed water. As he relives his adventures, Captain Schiller shares thoughts on evolution, what it means to be human, and why a lifetime at sea has convinced him there is a God.