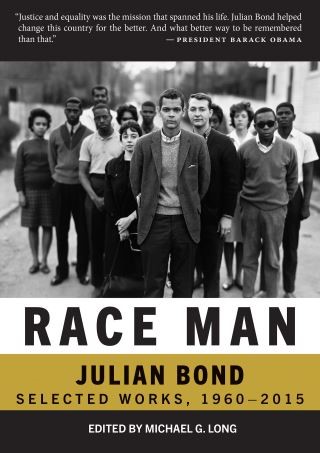 - Race Man offers the collected works of one of the most influential civil rights activists in US history, a unique, first-person perspective on the life and times of a historic—and beloved—civil rights leader.

- Bond's works, many of them published here for the first time, can offer us the fresh guidance we need in our ongoing fight against the virulent strain of fascism currently plaguing us. In fact, there is no better time than now to return to the wise words of one of our most trusted freedom fighters.

- At the same time, this compelling collection also offers a unique survey of the politics and economics of the United States as it moved toward the twenty-first century.

The writing in this collection spans from the Civil Rights Movement until to just prior to his death in 2015, including his commentary on Obama's presidency and life for African Americans in the United States in the 21st century.

- Julian Bond broke barriers through determined resistance and insistence. He was at the forefront of pivotal struggles for justice, peace, and social equity. This book takes a reader through his lifetime of dedicated resistance, as told by Bond himself.