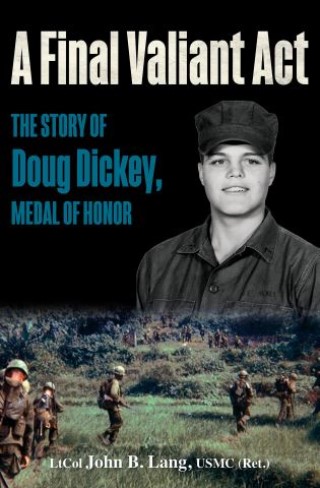 The Story of Doug Dickey, Medal of Honor

This Vietnam War biography recounts the story of an American soldier who heroically gave his life to save his comrades.

Private 1st Class Douglas E. Dickey was just twenty years old when he dove onto a grenade, saving the lives of four men, including his platoon leader. The young Marine’s actions on Easter Sunday 1967 won him a posthumous Medal of Honor.

Dickey grew up in Ohio and enlisted in the Marine Corps with four of his high school friends. After he was deployed to Vietnam, he took part in Operation Deckhouse VI, a landing in Quang Ngai, then Operation Beacon Hill, which led him and his comrades into a devastating ambush. During the ensuing battle—one that nearly wiped out the entire platoon—a grenade landed in their midst. Without hesitation, Dickey took action.

This biography grounds Dickey’s final, valiant act in the context of his life and the lives of his comrades and family. It is based on over a decade of research, including interviews with family members and Dickey’s letters home. A tribute to a true hero, A Final Valiant Act also includes the most detailed account of Operation Beacon Hill ever written.